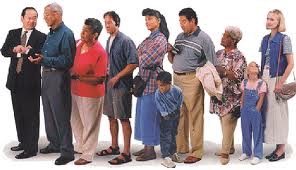 Johnny Cash walked it, Texans danced it, and Donald Trump crossed it.

The above lines refer to Cash’s lifestyle, “Achy Breaky Heart” choreography, and Donald’s policies. Since I prefer rock music, can’t dance well, and am a Democrat I find all of these lines annoying.

Almost as annoying as the lines I stood in during the holiday season.

By shopping online, I mostly escaped standing in line. I couldn’t find my last few gifts on Amazon (or they cost a bazillion dollars) so I had to go shopping FOR REAL. (The kind that you can’t do in PJs while drinking wine.)

I’ll stand in line to save a bazillion dollars. (Then I can buy BitCoin.)

After receiving a message from AT&T warning that my limited data was just that, I sought ways to entertain myself non-digitally while waiting.

Here are my top three suggestions for passing time in line.

This works well in grocery stores. Leave your cart in line, slip to the front, grab a tabloid, and return to your cart. While you snake your way to the register read about Heidi Klum, Nicholas Cage, and Harvey Weinstein.

It amazes me how many problems rich people have.

Heidi Klum, named as one of the worst dressed at the Emmy’s, wore wooden earrings the size of hula hoops on the red carpet. Were all her diamonds being cleaned that night? Red Carpet = Diamonds, Heidi! 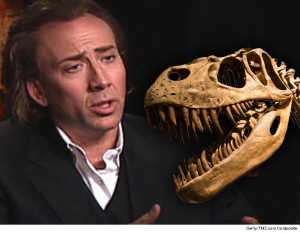 Nicholas Cage paid $276,000 for a Tyrannosaurus skull even though he owed the IRS $14 million in taxes. It’s called a budget, Nick!

Harvey Weinstein’s chickens (and there’s a flock of them) have come home to roost. Keep it in your pants, Harvey!

When you reach the register, replace the paper and feel good about leading life in anonymity.

If a baby is facing your way, make faces. I start with raising one eyebrow, progress to two eyebrows, and throw in hard blinks. (The kind that scrunches up your eyes and balls up your cheeks.) That usually gets their attention. For a baby to chuckle, I roll my eyes and stick out my tongue. By the time it’s your turn to pay, you will have entertained yourself, the baby, and other line standees.

Mess With The Group

Run a social experiment while you are standing in line. I’ve devised three: Telephone, The Wave, and Cuts. In Telephone convince the person in front of you to whisper a message to the person in front of him and so on until it’s returned to you. How the returned message compares with the original message is interesting and often humorous. (Since it’s a line and not a circle there are inherent problems in this activity.) The Wave, popular a few years ago in sports stadiums, involved fans standing in turn with hands overhead and then sitting down. This might require a demonstration and adaptation for a shopping line. Cuts is when you shout, “I saved you a place in line like you asked” to a random person passing by and observing reactions.

I honestly haven’t had much luck with anyone participating in the first two experiments and the last one might start a fight like the ones that often occur on Black Friday. 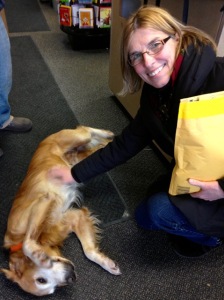 On rare occasion, I don’t mind standing in line. My local UPS store has a resident Golden Retriever, Shakespeare, who greets customers when they enter. Shakespeare appreciates the ear scratches and tummy rubs almost as much as the customers appreciate the distraction from the holiday line boredom.

2 thoughts on “Dropping A Few Lines About Lines”