Change dragged me by the ear, kicking and screaming, from present familiar situation to vague new future situation. My attempts at tiptoeing around this sleeping Cyclops of Change failed miserably. In spite of every avoidance measure taken, the Cyclops awakened, scooped me up, and thrusted me into the unknown. He set me down among the unfamiliar, blinked his enormous eye, and challenged me to figure it out.

I did. That’s how my Bah Humbug Bread rose from its haphazard start to a yearly Christmas tradition.

About ten Decembers ago, I braced myself for the “Gauntlet of Gaiety” known as the Christmas season. Facing my first holiday as a newly single, middle-aged woman the expected loneliness engulfed me. To avoid cheerful malls, I purchased gifts online. A “turkey in the box dinner” at the local Jewel, replaced my fussy Christmas feast. When I considered hanging all the Santa ornaments facing towards the tree so I wouldn’t see his twinkling eyes or rosy cheeks, I knew I had been Scrooged, and I didn’t like it.

I had a plan to halt my Ebenezer evolution by forging a new holiday tradition.

I’d bake bread – substantial and sturdy- qualities I desired. Not fragile cookies. Loaves and loaves of bread for everyone I knew – neighbors, friends, family, coworkers, and acquaintances. Neither Jacob Marley visited, nor did his three ghosts provide epiphanies. However, I had guidance from the Past, Present, and Yet To Come Bread Spirits.

The Past Bread Spirit

Deciding upon a plan and executing a plan are different. I hadn’t baked bread in years, and I didn’t have a recipe. It may have been the flicker of the overhead kitchen lights, rather than the entrance of a Bread Past Spirit that tweaked my memory, but thoughts of Polish Egg Bread floated through my mind. I recalled pulling off hunks of the yellow braid, slathering it with butter, and savoring the rich taste. My mouth watered as I Googled a recipe. Finding one, I downloaded, printed, and immediately adapted it to increase the yield. Since my list of bread recipients included everyone I knew (and didn’t discriminate between naughty or nice) I applied logarithms to the ingredients.

I knew one smidgen of loneliness couldn’t fit within the 10 yeast packages, 2 quarts of milk and 20 whole eggs (room temperature) that I combined for my (recently rechristened) Bah Humbug Bread.

In fact nothing else could fit in the volcanic mass currently erupting – certainly not the 10 pounds of flour that the logarithms calculated.

The yeast mixture brimmed the enormous bread bowl. The slight bubbling of the concoction threatened to provide the impetus needed to overflow the contents onto the kitchen counter. A butter wrapper, stuck to the bottom of my house slipper, flapped as I scurried from cabinet to cabinet in search of more containers.

Comet, my butter stealing English Setter, sat vigilant for the next opportunity to snatch the now out of reach Land O’ Lakes. The digital kitchen clock flashed “10:35” and challenged me to dump the overambitious bread-baking scheme down the drain and go to bed. Bake a few dozen rum balls and a cookie sheet or two of sprinkled sugar cookies in the morning, and I will have run that holiday gauntlet.

It may have been the lyrics to “Have a Holly, Jolly Christmas” that calmed me rather than the voice of the Present Bread Spirit, but I surveyed the results of my over ambitiousness and concluded that I could do this.

First the 10 pounds of flour to be added to the yeast mixture needed more space than the bubbling ceramic bowl allowed. So I collected every receptacle I owned: various sized mixing bowls, turkey stenciled Thanksgiving serving dishes and a roasting pan. Since the different sized containers held various capacities the yeast mixture needed to be divided accordingly and that ratio extended to the remaining ingredients. A spreadsheet worthy challenge! While I painstakingly measured liquid and bowl capacity, Comet’s unsuccessful bid at securing the last stick of butter dumped a measuring cup of flour on him, floor, and me. Though frustrated and exhausted, I persevered.

After mixing the ingredients, I combined the contents of the smaller bowls and cut the behemoths down to size, left them to rise and cleaned the kitchen. Once all were raised, braided and baked, I slumped down in my favorite reading chair with the bread aroma blanketing me and Comet poking me with his flour dusted snout.

The Yet To Come Bread Spirit 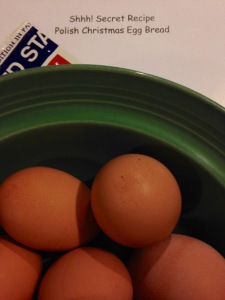 It may have been the apron hanging from the kitchen hook rather than the cloak of the Yet To Come Bread Spirit, but I foresaw the pleasure I would have as I distributed my Polish Egg Bread (It had reverted to its original name.) I surprised my friends, family, and colleagues with loaves the next day. Positive reviews rewarded my efforts. One friend confessed to eating the entire loaf in her car on the way home. A colleague planned her menu around it. My son declared it a family secret and adapted his own jalapeño, cheese variety.

I still bake Polish Egg Bread each Christmas, but I quarter the original recipe instead of increasing it. Baking it in batches is more manageable. With Mike my SO (Significant Other), his family, my son and his SO, my brother, friends, and a smattering of part time jobs I hardly have any alone time.

Now instead of tiptoeing around the sleeping Cyclops of Change, I nudge him from his slumber and offer him a loaf of bread!