Gambling is in my DNA. Mom enjoyed a fast paced game of Bingo. (I’m talking six cards at a time. The ink dabber polka dotted the cards faster than you could say, “And we have a winner!”) My Uncle Kakee’s luck (See Blog Post “Gambling On A Good Time”) was legend!

So it was only natural that when the McHenry VFW’s Queen of Hearts raffle pot swelled to $4,248,316 it piqued my interest.

The elusive Queen successfully hid for 47 weeks among rows of standard playing cards and two jokers that had been placed in numbered envelopes. During those weeks players chose numbers and wrote them on raffle tickets. The tickets were placed in a drum the size of a horizontal silo. One ticket each week was drawn. None of the tickets so far had the Queen’s number. Had the Queen been revealed the winner would have raked in millions.  Since that didn’t happen the pot rolled over till it swelled to the current sum. 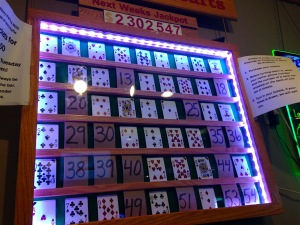 I hope the VFW recycles because the tickets are dumped weekly and it’s estimated that 2.2 million tickets will be sold by Tuesday. This spike in sales is due to the longevity of the current game. The game’s popularity exhausted volunteer ticket sellers, caused traffic jams requiring police intervention, and necessitated remote parking spaces to accommodate parking for gamblers. A drawdown till there’s a winner solved the problems

Having played Queen of Hearts once and lost, I steered clear for weeks. Then the drawdown appeal kicked in. Someone will win this week. It could be me!

I calculated the odds . . . or tried to using Mike as my sounding board.

Mike: It doesn’t work that way.

Mike: No, your ticket may be pulled from the 2,200,000, but then it must also have the winning, queen number. There are seven possible numbers.

Me: (Thinking my outdated iPhone doesn’t have enough memory to calculate this problem so I estimate.) So then it’s 2,200,000 times seven. That must be close to a bazillion!

Mike: (Who has had enough of this inane conversation wanders away.)

Surely there was an easier way for a chance to win $4,000,000. The opportunity presented itself while I paid for my gas. 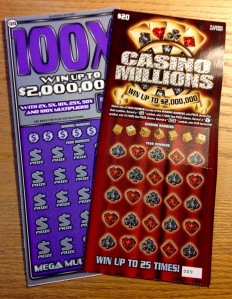 At the local Mobile station I perused the scratch off lottery tickets and picked up two $20 games – 100X and Casino millions. Each one advertised a chance of winning $2,000,000. Put them together and that came close to the Queen of Hearts pot. 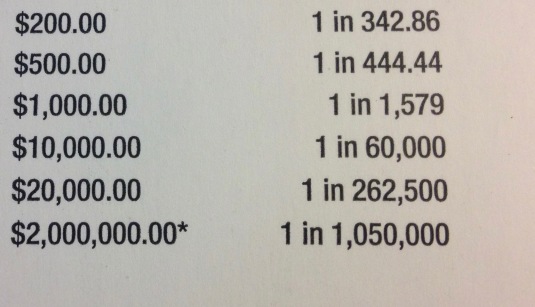 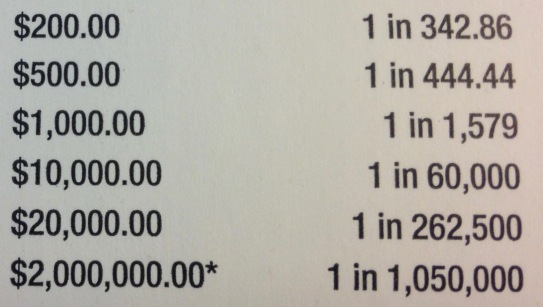 In addition to the odds Gregory Smith who is Director of the Illinois Lottery added other vital information.

For instance if I DID win the $2 million, I would not receive it in cash at the station where I purchased it. I would need to mail in the ticket to an office in Springfield. Right, I’m going to trust Springfield not to lose my jackpot ticket. I figured if I won I’d drive the ticket up there.

There was also a number to call in case I had a gambling problem. Then he encouraged me to “Have fun!” I don’t think calling a crisis counseling line would be any fun at all. 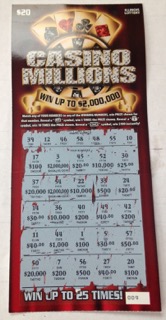 Forty dollars gone and all to show for it are annoying lottery card shavings peppering my desk.

Maybe I should have braved the crowds and purchased tickets for the Queen of Hearts.

The drawing is at 8 pm tonight. I bet there’s still time!