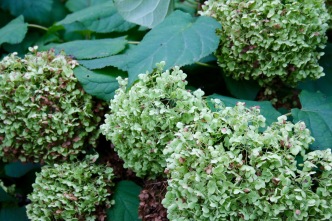 Why should I spend $250 on five 3-gallon Limelight Hydrangeas when a thick hydrangea jungle grew in my backyard?

Why should I read instructions on transplanting these shrubs when I’ve been an avid gardener for decades?

Five hours (and as many hydrangeas) later answered these questions that I had asked myself.

Consulting online Hydrangea Relocation instructions post-relocating hydrangeas was not the way to go. It caused  “closing the barn door after the horse has bolted” regrets. I couldn’t have created more difficulty or completed the task more incorrectly than if I had made extreme exertion and murdering the shrubs my goal.

How To Relocate Hydrangeas Instructions(And What I Did):

* Choose an appropriate location – one with morning sun and afternoon shade.

(I chose a location that blocks my neighbors’ air conditioning unit that I can see from my deck. The hostas seemed happy there, but were too short.)

* Perform the move on a cool, cloudy day. It helps to keep roots from drying out.

(A dip in the mosquito swarms and a free Sunday afternoon met my criteria for “Operation Hydrangea”. The threatening rain had held off.)

* Water the hydrangea deeply two to three days prior to transplanting to reduce stress and make it easier to move.

(How was I to know on Thursday that Mike wouldn’t want to pontoon the lake on Sunday because his cousin, Neal, might drop over? What am I, a seer? )

* In most cases transplanting hydrangeas is a one-person job, provided you have the necessary muscle to lift plants from soil.

(It’s a one-person job if you’re Wonder Woman and have your Lasso of Truth handy.) 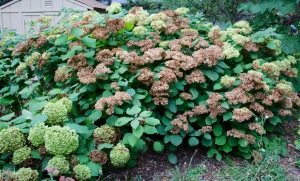 * Dig around the plant to a depth of ten inches with a sharp spade just outside the leaf canopy.

(Since the shrub crowded around and under the flagstone path, and I was without a Lasso of Truth to move the flagstone, I dug between the flagstone and bush. My shovel bit in about an inch. Not to be deterred, I jumped pogo sticklike unto the shovel. Losing my balance I tumbled into the neighboring hydrangea, which broke my fall, but not my spirit. (Hydrangea 1, Embarrassed Anita 0.)

*Sever all roots around the root balls circumference before pulling the hydrangea from the ground.

(Looking around to make sure no one witnessed my blundering maneuver, I resorted to digging with a hand trowel to uncover what deflected my spade. Roots the diameter of a hose networked underground. This hydrangea’s stubbornness rivaled mine. Lacking a machete I used a lopper. Hydrangea 1, Stubborn Anita 1. )

* Use a shovel to start rocking the shrub until it’s free underneath.

(Using the garden fork as a lever I heaved it forward. While swatting a mosquito I lessoned the pressure causing the implement to fling back within a leaf’s width of knocking my teeth out. Hydrangea 2, Anita with bridge intact 2. It was a draw.)

*Separate the bush in equal halves by pushing the two sections apart to reveal the root ball or crown. Tie the lower limbs with twine to keep them out of the way.

* Enlist a friend or family member to help you hoist a larger plant root ball onto a tarp and drag to the new location. 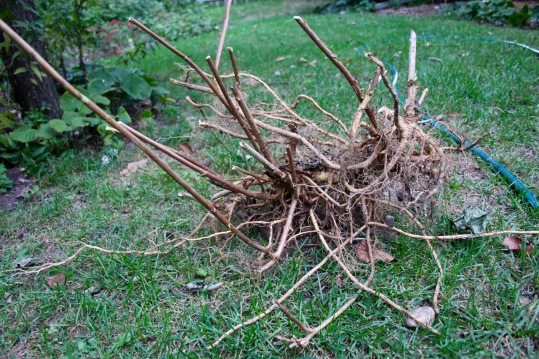 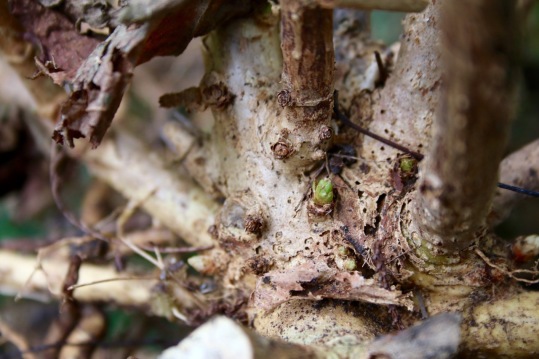 (By this time Mike’s cousin arrived and they were into their second Scotch on the rocks. If they kept this up I would have to hoist both of them onto a tarp to get them to their new location. Since I didn’t have sober help to move a large root ball, I reduced the root ball.  There was NO WAY this sucker wasn’t getting planted today. It looked bad, but hope budded. Hydrangea 2, Sober Gardener Anita 3, Mike and Neal 2 and counting.)

(Since I reduced the root ball, the planting hole also decreased proportionately . I shoveled a load of dirt from my compost pile taking pride in the rich newly formed soil. Then I noticed the terra cotta pot pieces poking out from around the shrub base.  I had thrown the remnants of potted impatiens into the composting and neglected to take out the shards I had used for drainage. Hydrangea 2, Frustrated Gardener Anita 3, Broken Terra Cotta Pot 1, Mike and his cousin 3.)

*Water the roots deeply to settle the dirt.

(While picking out the terra cotta pot shards, the threats of rain were not hollow. A cloud burst soaked the new transplants and the transplanter. Hydranea 3, Wet Gardener Anita 3, Broken Terra Cotta Pot 1, Rain 1, and Mike and his cousin . . . lost count.)

While drying off, I poured myself a Scotch and thought of how easier it would have been to buy five 3-gallon Limelight Hydrangeas for $250.

I toasted the transplants and wished them well. If the spring coaxed new shoots despite my errors, we’d all win.

2 thoughts on “Anita VS Hydrangeas”