This blog post reviews key plot points and creepy scenes of “The Mummy” (but not many because I closed my eyes at the scary parts.)

I’m a horror film scaredy-cat. As a child I found “Abbot and Costello Meet Frankenstein” frightening. Even Lou’s trademark “Heeeeyyy, Abbott!” and “I’m a baaaaad boy!” couldn’t alleviate my fear.

Each week “Twilight Zone” sent me into a light switch flipping frenzy. The house was ablaze before Rod Serling finished his introduction to the episode. All that wattage didn’t ward off a restless sleep after viewing “Nightmare at 20,000 Feet.” I kept my bedroom curtains drawn for weeks thinking if a gremlin can hang onto an inflight plane and peer into the aircraft porthole what’s to stop him from staring into my second floor window?

So why does a scaredy-cat watch creepy shows?

If my older brother viewed “Twilight Zone” without flinching, I’d give it a shot.

If my friends watched “Invasion of the Body Snatchers” without jumping, I was onboard.

If Mike, my significant other, was in line for “Alien: Covenant,” I was right behind him.

That’s how I found myself with Mike, his daughter Tracy, and son-in-law Derrick, (three hard-core horror film fans) at a 3D showing of “The Mummy.” By employing the simple Scaredy-cat Survival strategies I developed through trial and error, I didn’t flinch or tremble.

I watched “The Walking Dead” clutching a remote control. Mike tutored me in classic zombie behavior. Apparently zombies contracted a virus causing them to walk slowly, crave human flesh, and endure forever until their brains are pierced.

I asked because I wondered why they hadn’t hopped in an abandoned vehicle and chased whomever they wanted to eat. This was important for me to know because I identified with the main characters. Those, alert and fleet of foot, avoided zombie contact. Since I’m physically fit and watchful, I’m safe.

Of course weekly there’d be a slow, distracted character that would fall victim to a zombie. During those scenes I’d glance at the screen for a few seconds, eventually increasing my viewing time till I could watch an entire zombie attack.

The remote control gave me power over the zombies. I could change AMC to CNN if it became too intense. (At times I felt like changing CNN to AMC but that’s a different kind of scary.)

In “The Mummy” innocent bystanders transformed into zombielike beings that do the Mummy’s bidding. Those scenes didn’t spook me since they were similar to TWD zombies. I don’t think they could drive either. (Mike didn’t know for sure since they weren’t official zombies.)

There’s a direct screen size to fright ratio- the larger the screen, the bigger the scare. Since “The Mummy” played in 3D format on the large screen instead of my iPod, I needed to diminish the visual impact. There were three ways to accomplish this. I used all three.

I closed my eyes- primitive, but effective. However, missing what happened during a key scene offset the benefits. I’d want to ask Mike to fill me in, but then I’d remember the animated M&M’s warning me to shut off my phone and be quiet during the show. Not wanting to upset the candies, I pieced together what happened on my own.

Other times I looked over the top of my 3D glasses instead of through them. Blurring the 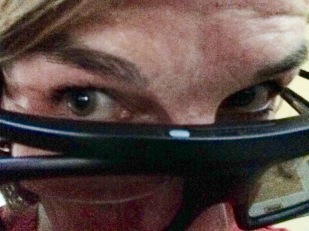 images limited their effect and I had a good idea of what was going on.

Another time I took off my jacket and peeked through the buttonhole thereby eliminating the periphery. This last technique though allowed the viewing of the Mummy’s pupils dividing like amoebas, which was disconcerting.

Strategy 3, Anticipate and Gird Your Loins

When Tom Cruise sought out a remote abandoned farm at night (Couldn’t he wait till morning?) and the soundtrack turned dissonant, I knew this scene was a hair-raiser. I upped my guard. If I knew a jump out of my seat experience was imminent, so did my movie-viewing companions. The poke from a friendly prankster didn’t lift me a foot off my recliner because I anticipated it. I’ve been caught unawares in the past.

The credits rolled, the lights rose, and the four of us exited the theater. I thought “The Mummy” scary and congratulated myself on handling it well. Mike and Tracy rated it low on the horror-flick-o-meter. Derrick slept through most of it.

I didn’t flinch until later in the evening when I learned the 3D Saturday night ticket price set Tracy back $17.69.

As a bargain matinee customer THAT was the scariest part!