This joke is no joke.

Chickens are getting so large that they are uninterested in sex. No sex. No eggs. No eggs. No chicks. A chicken or an egg shortage may be imminent. I’m not sure which will come first.

The world loves to eat chicken. So breeders produce meat faster by mating larger roosters with larger hens. Breeders are not bad eggs. They’re attempting to solve the problem. However, the chickens have come home to roost. Now they are so heavy they aren’t interested in reproducing.

I’m cock sure of this because I read it on Facebook. (I think it was right after the clip of making your own air conditioner using a fan, ice, and recycled plastic liter bottles. If you missed that hack you didn’t miss much. I suggest if your air conditioner is kaput during a heat wave, go to the movies.)

In my research I read about icky chicken raising practices. I’m all for humane treatment when bringing chickens to market. I buy free-range chickens and eggs. I’m a chicken advocate.

I’m also at the top of the food chain. I eat chicken. I eat eggs. No guilt here. If I were a potato bug or a centipede and stumbled into a Brown Leghorn, she’d be on me “like a chicken on a June bug.”

In light of this trend towards oversized chickens, I caution my readers to choose their words carefully to communicate ideas accurately. Otherwise you may have egg on your face. Rethink the following phrases. 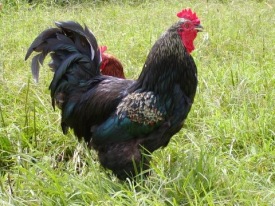 Chicken feed means a small amount of money. A job may be described as “paying chicken feed.” The Jersey Giant chicken negates that saying. It weighs in at 10-20 pounds. That scale tipper pecked through sacks of feed to reach that size! According to chickenbreeds.com this variety of chicken eats too much to make it to the dinner table. So if a job is offered that pays chicken feed, if it’s the Jersey Giant’s diet, take it!

From time to time I chicken out. I backed out of a white water rafting adventure when Widow Maker and Terminator described rapids rated in the double digits. Then afterwards rafters hiked out of a canyon. (I shopped instead.) Merakli, a confident 18-pound Brahma chicken, flipped the connotation of the chicken out phrase when he emerged from his coop. I don’t think Merakli is afraid of anything. When next faced with a harrowing experience, chicken out like Merakli![youtube

My idea for a traveling squirrel circus (hatched after two scotches) laid an egg. It failed before I installed the fist trapeze. (Squirrels are too unpredictable.) That phrase is no longer valid. According to United Egg Producers in 2015, US egg production was down 6% from 2014. Production down, prices up. If you lay an egg, it’s worth more now than before. That sounds like a chicken in every pot to me, not a failure. Hope that your business plan lays an egg!

Fat chickens may have drawbacks, but a positive is using fat to power cars, trains, and jets. It’s called biofuel. This is not a cock and bull story! Tyson experimented with converting chicken fat into car fuel. NASA tested a chicken fat fuel mix for jets. Bill Gates didn’t put all his eggs in one basket. He invested a bazillion dollars (or about that) in a biofuel company.

Professor Cliff Rickets from MTSU drove his 1981 chicken fat fueled Volkswagen Rabbit pickup from Key West to Seattle. However he counted his chickens before they hatched because it solidified when temperatures dropped. This answers the question.

Why didn’t the chicken cross the road?

(It must have been during the summer!)

1 thought on “Why Didn’t the Chicken Cross the Road? Because He Was Too Fat And Slow To Avoid The Traffic!”

Join 243 other followers
All work on this site is copyrighted and cannot be reprinted without express consent of Anita. Just ask first, okay?
Loading Comments...
%d bloggers like this: