Alexander Acosta, the Secretary of Labor, needs our help!

According to a recent Labor Department data release “job creation fell sharply in May with just 138,000 new positions created.”

Alex sits atop an organizational flowchart of the Department of Labor outlining various departments and responsibilities. It looks like a complicated maze that dilutes ideas from the top down as well as the bottom up which may be part of the problem.

A recent grocery-shopping errand sparked a few ideas for the Department of Labor to consider.

Last Saturday I waited in line at the Jewel Deli for a quarter pound of thinly sliced prosciutto to use in my Sunday Frittata. After wading through the crowd, dodging a shopper questioning the difference between the Grandma’s and Homestyle’s potato salads, I pulled a number from the coiled paper stream that assigned my position in line. Noting that a comma was needed to report my turn, I settled next to the sampling table and snacked on Gouda cheese. I had fourteen other items to purchase, and bemoaned my prosciutto wait time. There had to be a better way! What if there was a Deli Delegate Program available? Upon approaching a crowded deli counter, a Deli Delegate would offer to hold your place in line while you shopped the remainder of your list. The DD could also place your order in case hell froze over and your number lighted up above the counter before your return. (Of course you could take a number, shop your list, and gamble that your number isn’t called while you are gone, but that’s a surefire way to trigger a polar vortex in the Underworld.)

After securing my prosciutto, I employed my “Grocery Aisle Traffic Jam” strategy. This approach required parking my grocery cart near an end cap of an aisle and snaking my way cartless through the shoppers, pausing to snatch a jar of capers, goat cheese, and the remainder of my 15-item list. I juggled as many products as possible before returning to base camp. This usually worked, but I had contracted “grocery store tunnel vision” syndrome. This condition resulted from the laser sharp focus needed to complete the weekly task in less than an eon. Only focused on the next item I dumped my armload of jars, cans, and bags into a foreign grocery cart. Several departments away, the fog cleared. I noticed half dozen cans of Meow Mix and a package of Pampers alongside my capers- no prosciutto! At this point I considered my options: backtrack and find my cart, abandon this cart and start over, keep the cat food and diapers with the intention of adopting both cat and baby. If there were a Cart Recoverer to employ I would describe my cart with the deli purchase. CR would search the aisles for my cart, return the kidnapped Meow Mix and Pampers to the rightful shopper, and restore balance to the Universe. 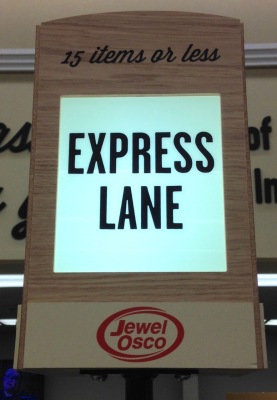 Limiting my purchases to less than the designated Express Line quantity was crucial. However there were dishonest shoppers who blatantly placed more than the limit upon the counter and got away with it. An Express Line Monitor would right this injustice! ELM would enforce the quantity limits. If shoppers were over the limit, they would be directed to the regular checkout line. An ELM would make important judgment calls such as does a dozen bagels count as one or twelve items? (An aside here: I also think a “No Bitch Line” should be established in every grocery store. In the NBL, shoppers can’t ask for a price check, question a coupon, or request a review of the receipt – nothing that will slow the process.)

If two Deli Delegates, Cart Recoverers, and Express Line Monitors were employed at all 38,000 supermarkets in the United States it would boost the new job creation numbers by 228,000! This is 90,000 more jobs than the May Department of Labor statistics.

What are YOUR suggestion for new jobs? I’ll recommend them to the Department of Labor as soon as I figure out which department to contact.