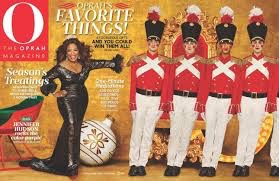 Julie Andrew’s character, Maria, belted out her favorite things in “The Sound of Music.” Her dozen plus favs ranged from kitten whiskers to strudels that are either free or relatively cheap. (Although I think nowadays there are online pastries that could rack up a considerable amount of reward points.)

Oprah on the other hand doesn’t hold back. Her 2017 Favorite Things list is about eight times as long as Maria’s and with the exception of the “Sound of Your Soul” podcast isn’t free. (I didn’t listen to the podcast. I already know how my soul sounds. It’s sarcastic. I’m lucky God has a sense of humor.)

Moments are my favorite things – ones that offer a bit of luck, surprise or insight. More like “I used too much Charmin and the toilet still flushed” and less like “raindrops on roses” kind of moments.

The Accidentally Not Getting Lost Moment:

I get lost quite often. (See Post 21 “Directionally Challenged) By car, on bike or foot there is a good chance that I will not find my way to the correct destination in one go. Navigational systems have greatly aided my disability. Prior to this technology I relied on a sheaf of maps, handwritten directions, and random pedestrians who happen to be walking by when I pulled over in an anxious huff.

As a new teacher unfamiliar with Crystal Lake, I needed to attend an evening meeting at a colleague’s home. Armed with the aforementioned tools I struck out on what should have been a fifteen-minute drive. Luckily I calculated in the standard quarter hour of wandering aimfully cushion, added ten more minutes for the unfamiliar territory factor, and slapped on extra five minutes for an after sundown element. Beforehand I traced my route on the map. I did well on the main roads. Then the twisty side streets muddled my progress. As my anxiety built I turned arbitrarily resulting in a circuitous journey. Before hyperventilating, I pulled over searching for a pedestrian to interrogate. The deserted streets offered no help. I checked my map and left the parked car to find a street sign. Amazingly the street sign and the map correlated. I was on the right road! Counting off the house numbers as I returned to my car, I was astounded to find I had accidentally parked in front of my destination . . . and I was on time.

I wouldn’t trade that moment for a ride on “a cream colored pony.”

Remembering Names Before The Namesake Realizes It Had Been Forgotten:

I meet a lot of people and most of them have different names. This presents a problem. I’m not only expected to remember the names, but which one is assigned to each person. For instance Rich and Jenny have three daughters named Anne, Elizabeth, and Olivia. Using a memory trick I remember that their names begin with vowels alphabetically and were given to the girls in birth order. This works exceptionally well when they are all together and lined up. Mnemonics helps, but isn’t foolproof. When Elizabeth asked to be called Beth instead, that initiated a round of renaming. Anne favored her middle name Marie (which was Grandma’s first name) and Olivia shortened hers to Liv. I support creativity and freedom of choice, but in this case it disabled my system. Recently I met Jenny at the grocery story with one of her daughters, I was about to slot in “Hon” for the direct address in the “How’s school, (INSERT PROPER FIRST NAME HERE)” question when my neurons sparked across the synapse and Beth popped out of my mouth. The lost daughter’s name appeared before Jenny and Beth realized I had forgotten it!

I’ll take that over “schnitzel with noodle” any day.

Being Shoved Into A Different Point Of View Moment:

While substitute teaching, I reviewed short vowel sounds with second graders. I held up a picture card with an image whose name contained a short sound. For instance a pig has a short i, an apple has a short a, a net has a short e, and so on. Students identified the picture and assigned it a short sound. We were cruising through the pictures, inserting the cards under the right heading on the chart when I held up a picture of a rug. The exchange jolted me out of my calm.

Me: What is this a picture of?

Me: (Furrowing my brow and studying the card.) Sushi?

Doug: Yeah, sushi. I think it’s one of those California rolls.

Another Random Kid Sitting On Floor: We’re not in California so it can’t be Sushi.

Doug: (Patiently explaining) There’s rice on the outside. Then avocado and crab inside.

Second Random Kid: Then I wouldn’t go to California.

Me: (Examining card) Ok, I see it now. It does look like sushi. Except sushi doesn’t have a short u sound in it. It’s a long double “oo” sound. That doesn’t come up till at least fourth grade, but we’ll make a place for it now. (I make a separate column for the sushi-rug.)

Doug: What did you think it was?

In this moment Doug reminded me if I look beyond the rug, I might see sushi.

And that’s worth more than “doorbells and sleigh bells,” and a whole rack of “white dresses with blue satin sashes.”

6 thoughts on “My Favorite (Not Things) But Moments”