Little did I know that cutting down an Emerald Ash Borer infested tree would result in retribution from the seemingly calm Black Walnut alongside my home.

For years Blackie behaved like Black Walnut trees typically behave. He sprouted leaves in spring, casted shade in summer, dropped nuts and leaves in fall, and like the rest of us enjoyed long naps in the winter.

This autumn Blackie had a score to settle.

In late summer Emerald Ash Borers won the battle over my front yard ash. A crown of bare branches and fallen limbs signaled it was time to pull the plug or in this case rev the chainsaw. One phone call, a reasonable estimate, and a week later Ashley the White Ash that threatened the well-being of my home vanished. The arborist left behind a mound of shavings and an empty spot. I missed Ashley almost as much as the squirrels, but as in all failed relationships. It was time to move on.

I pondered about a replacement tree. 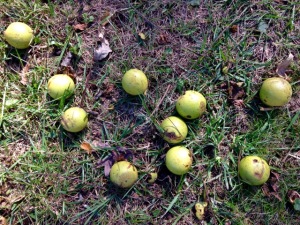 At first a few pungent, tennis ball sized husk encased black walnuts littered the lawn. This was Summer Blackie morphing into Autumn Blackie. He outdid himself! Hoarding squirrels couldn’t keep pace with the bounty. I gathered a few nuts and tossed them in the yard waste bin.

Traversing the lawn felt like walking on ball bearings. When a slip became a fall, I thought I heard a snicker emanating from the bark.

I gathered eight garbage cans half full of the fragrant orbs prior to mowing the lawn. (Full garbage cans would have herniated a disk, which in retrospect I believe to have been Blackie’s plan.) Nuts pelted the ground near me as I harvested. I checked to see if a target had somehow appeared on my back.

One night an October wind joined forces with Blackie. It sounded like hail bombarding the roof. In the morning my lawn looked like the aftermath of a Wimbledon wannabe practice session.

The camouflaged nuts were Blackie’s land mines. When my mower passed over one the husk shrapnel flung in all directions (one of them mine) and almost put out an eye. I carried on pausing to kick a nut aside when alert or ducking the bombarding bits when I wasn’t.

Enough was enough! In order to solve a problem, I needed to understand the problem.

On the Internet I found a Black Walnut Cake recipe. Perhaps I could benefit from all the nuts gathered rather than have them hauled away. An article, “15 Steps to Cracking Black Walnuts”, appeared in my search list. Fifteen steps rendered one of the ingredients and picking up the nuts was the easiest task. The other fourteen involved hammers, thick rubber gloves, and an automobile. (Apparently driving over the nuts is one nut cracking method.)

A solution didn’t form, but several explanations did. “Ask an Expert” claimed that walnut trees have an alternate bearing cycle. One year there’s a bumper crop the next not so much. Blackie’s nut bearing mood never swung that wide. I didn’t buy into that one.

The amount of rainfall was another reason – the more rain the more nuts. The spring brought higher than ordinary moisture, but I felt this excessive nut problem was personal.

Then I watched Suzanne Simard’s TED talk on YouTube. According to ecologist Simard trees talk to each other over vast distances. They do this through a fungus network and tapping into it with their roots.

Now it made sense! Ashley must have signaled Blackie that she was headed for that great forest in the sky. Blackie committed to avenging her death! Can’t say I blamed him.

Upon further reading, Forester Peter Wohlleben’s research helped form my solution. According to his book, The Hidden Life of Trees, “trees are tribal and ruthlessly protect their own kind.”

Now I knew how to make peace with Blackie. I chose a nut from the lawn and buried it in Ashley’s hole with the hope that it would eventually sprout.

Blackie will communicate with the seedling, forgive me, and reconsider another nut barrage next fall.

I know this is true and it will work because I read it on the Internet.