October brings beer to mind. (So do the other eleven months, but it’s October now.) While skimming USA Today, my eyes tripped across the headline “Cleveland’s Brewnuts makes doughnuts with beer”.

Alert to unusual and successful ideas I read on. The brewers at Brewnuts combined good beer with good doughnuts made from beer and sold them under one roof.

It’s like Gutenberg and the printing press (He combined the idea of a wine press and coin punch.) but not as important.

The combination of beer and doughnuts succeeded. Brewnuts is Cleveland’s new hot spot. (Although I don’t think beer doughnuts’ popularity will last as long as the printing press’s.)

Inspired by beer and Gutenburg, I decided to combine Mike’s (my Significant Other) birthday dessert with beer. Chocolate being a required ingredient. (Mike is a hard-core chocolate cake fan. Once he baked an lasagne pan of his mom’s sour cream chocolate cake, divided it into fourths, and froze ¾ of it in case of a chocolate cake emergency.)

A Googling stream of consciousness yielded a flight of beer baking ideas. I ditched constructing a “Tower of Beer Doughnuts Birthday Cake” because I didn’t have a fryer to make doughnuts and Cleveland isn’t close enough to buy them from Brewnuts.

“Beer” and “Cake” descriptors generated a six-pack of recipes most of which required a Bundt cake pan. I don’t own a Bundt cake pan. I could have purchased one from Target (which is closer than Cleveland), but I was still in my pajamas (See Post 28 about PJ’s). Also I had a perfectly good 8”X 12” pan in the cabinet.

Adding “single layer” to the search worked. “One Layer Chocolate Stout Cake” surfaced on my iPad. The recipe included several chocolate ingredients in addition to beer. I used Vanilla Porter because vanilla is a baking ingredient (I’m not sure that logic followed.) and a porter because I didn’t have a stout (This is a corollary to the Bundt cake pan philosophy.) About an hour later my beer cake emerged from the oven.

I had informed Mike earlier in the day that his birthday dessert was a beer cake. Wariness crossed his face. As a serious chocolate cake eater, a beer chocolate cake is frivolous. I wager that when he blew out his candle he wished for a NORMAL chocolate cake.

The Chocolate Stout Cake tasted like . . . chocolate porter. Not bad, but not a typical chocolate cake. The next morning it tasted better. Either the spices gelled or it grew on us.

That weekend, Tracy, Mike’s daughter,  baked chocolate cupcakes for his birthday. They were delicious, but tasted different. Rumchata being the different ingredient. 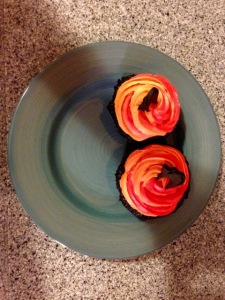 Mike claimed to enjoy both alcoholic versions of his favorite dessert. However, the ratio of beer cake to rumchata cupcake consumption, tipped slightly in favor of the cupcakes.

Though Mike appreciated both desserts, I bet an ale that this weekend he’ll bake his own sour cream chocolate cake.

And as he does, I will drink another Breckenridge Vanilla Porter and consider baking Brown Sugar Beer Cookies next.

After all, it is Oktoberfest, and I like to  eat my beer!