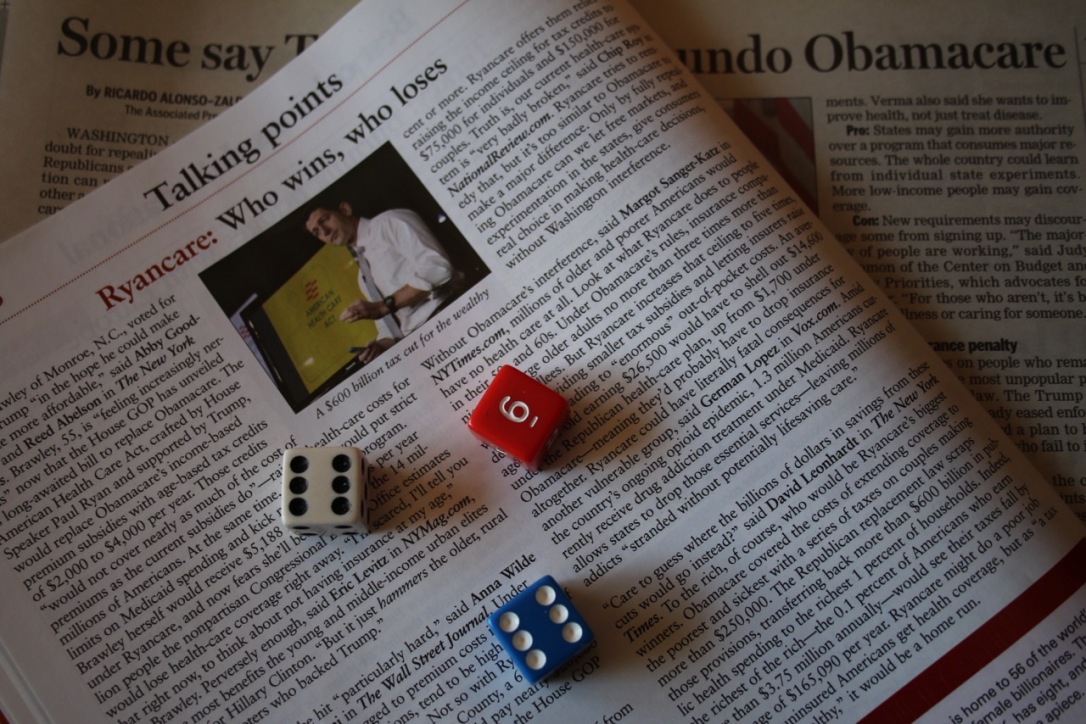 This is fake news.

This is what really happened.

After playing Bunco for seven years, consuming bowls of M & M’s and bags of cheese curls, I read “Bridge to Brain Power,” an article about how playing bridge sharpens mental acuity. I extrapolated that if a complex game like bridge sharpens mental acuity, does a simplistic game like Bunco dull it?” I tested this hypothesis at my monthly Bunco game night. The empirical evidence supported my premise.

I observed well educated adult women choose different sized and colored dice, execute varied rolling techniques, and utter “come on sixes” all to improve the probability of rolling three of the same number and score a Bunco.

None of these techniques work. (I know because rolling the small, green dice with a wrist flourish and shouting “let’s see some fours” didn’t result in a Bunco for me.) The only strategy to improve your odds is to sneak in another die when it’s your turn. (Eventually the other players catch on.)

My challenges in this game are to ring the bell when the head table scores twenty-one, move in the right direction when I win a round, and finish an anecdote before it’s my turn to roll the bones again. I fall short in all of these areas. I didn’t have a Cat or Pet Scan to prove brain cell destruction, but I did forgo the cheese curls just in case. (I’m taking my chances with the M & M’s.)

If I’m right and Bunco does reduce mental acuity, the social interaction restores it – a yin and yang. Short anecdotes shared during the game are a prelude to the problem solving discussions afterwards. Gathered around the dessert table I learned about reasonably priced baby shower gifts, store discount days, and the difference between Medicare Part A and Part B. (Respectively the answers are quality holiday bibs and usually Tuesdays. The Medicare answer is too long to include here. You’ll have to find your own Bunco group.)

Since the Bunco problem solving discussions are so helpful, I propose that Congress participate in one large Bunco game. It wouldn’t cost the taxpayers anything! It could be held in one of the White House ballrooms. With all the committees, I’m sure there are conference tables that can be utilized. Maybe the Senate can roll up their sleeves and move them. Then the House of Representatives could bring the snacks and dessert. (This would be called working cooperatively.) Although the executive branch wouldn’t be invited to this gathering, perhaps, in a show of support, President Trump could uncrate and donate the dice put in storage when his Atlantic City Taj Mahal Casino bankrupted. (I should tweet him about that.)

Issues like health care and immigration and the wall would undoubtedly be brought up during the game. There wouldn’t be a filibuster because the filibusterer wouldn’t have much time to talk until it was his turn to roll again. Afterwards around the dessert table the problem solving would take place.

With monthly Congressional Bunco Nights, I predict that in a year every American would be insured, citizens could freely travel to their country of origin, and all of North America would be friends again.

Therefore all of Congress is required to stay for the entire Bunco evening. No leaving early because not one of them has a brain cell to spare!